Commissioned by Blueprint magazine the project was a response to Le Corbusier’s 15sqm Cabanon. Mobile Studio proposed an Activist Mobile Retreat (AMR), as a form of compact living for a political activist.

Inspired by the Serious Organised Crime and Police Act 2005 (SOCPA ss132-138), which ban unorganised protest within 1 mile of Parliament, the Activist Mobile Retreat re-appropriates domestic architecture of the home as a form of personal political expression.

The architecture and location of the AMR and its boundaries fluctuates in response to current political activity, moving to where the action is. The home and lifestyle are influenced by politics, as such, there is no real retreat, which is why the architecture of the home is used to express the activist’s shifting concerns. 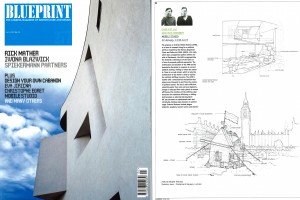 As featured in Blueprint Magazine